Australian freediving welcomed its newest National Record holder on the 7th of May, 2015. Adam Stern dove to 85m in the discipline of Free Immersion, breaking the existing Australian record by 1m. The record was set on the final day of Vertical Blue on Long Island in the Bahamas. A little more than a month later Adam was at it again when he was at the Nirvana Ocean Quest on San Andres Island in Colombia where he raised the bar again by setting another Australian free immersion record of 86m. 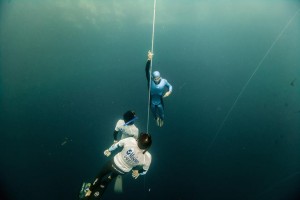 Going into Vertical Blue Adam was initially focussed on constant weight and early in the 9 day competition he set a personal best of 93m. To prepare for the competitions Adam arrived in Long Island for three weeks of training prior to Vertical Blue to help acclimatise himself to diving in the darkness of Dean’s Blue Hole, the deepest of its type in the world. Of his two record setting free immersion dives, Adam said “The beautiful conditions of both these competitions paved the way for these two dives. With flat seas and no current it’s very hard not to dive at your best!”