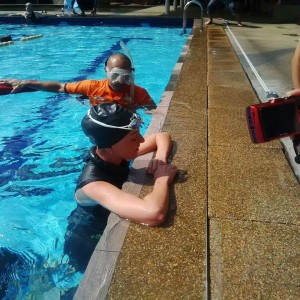 Australian freediver Amber Bourke has won the women’s division of the MDC PoolMaster Apnea Challenge held in Malaysia on 28 March. Over twenty athletes from eight countries contested the challenging event in which STA, DYN and DNF are all contested in a single day. The men’s division was won by Belgian Jean-Pol Francois, with former AFA member Jonathan Chong, who now resides in Singapore, placing second. Another former AFA member from Singapore, Michelle Ooi, also had a successful competition breaking her national record in DNF.

Amber Bourke is the current Australian national record holder in DYN and DNF and will take great form from this competition into the Australian Pool National Championships to be held in Gladstone next month. From there she will contest the World Championships in Serbia in June.