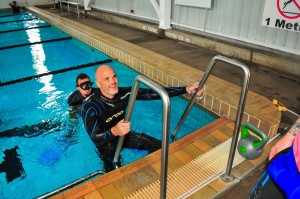 Leigh Woolley after his impressive 172m dynamic no fins performance.

The second annual Australian Pool National Championships, held in Gladstone from May 29-31, was a great success with athletes from several east coast clubs and Adelaide attending. The event was held in conjunction with the Curtis Coast Freediving Challenge, which is in its 4th year and has become a fixture on the Australian freediving calendar.

This year’s event was extremely close, with Brisbane Freedivers Nicole Keating and Leigh Wooley crowned the new national champions. It is the second year in a row that Brisbane has won both the male and female championship. But the competition is getting extremely close, especially with promising athletes rising in the newest clubs in Adelaide and Melbourne. Next year Pool Nationals will likely be held in Melbourne, which will keep promoting the development of competitive freediving within the southern states.

AFA President Michael Bates congratulated Pat Falls on his efforts to organise such a well-run competition. The Curtis Coast Challenge has been an exceptionally welcoming competition, and has been the first freediving competition for several of the athletes in its four-year history. Several national records have also been broken in this event. This year was no different, with Pejman Siavoshi breaking his Iranian DNF record. 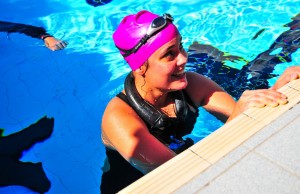 Nicole after her 150m dynamic with fins performance.

The National Championship was a great lead up competition for Amber Bourke and Patrick Falls, who will represent Australia at the Pool World Championships later this month. It was also great judge development and particularly timely for Fran Rose, who has been selected to judge at the Depth World Championships later this year. At the close of the National Championships, Michael Bates on behalf of the AFA, wished the athletes and judge the best of luck at world championships and encouraged other athletes to represent Australia in the future, “the results from Nationals were of the highest standard and I hope to see more of our many world class athletes representing Australia in the future”.