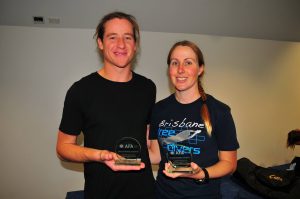 Local Brisbane freedivers Beau Armstrong and Emily Shaw took out the 2014 National Pool Championships, which were held Sleeman Aquatic Centre in Brisbane. Both Beau and Emily put in strong performances in each of the disciplines of static apnea (STA), dynamic with fins (DYN) and dynamic without fins (DNF) to finish with the highest overall points at the end of the competition. The men’s division was a closely contested event with Michael Bates (Brisbane) and Jack Hatfield (Sydney) both finishing within 5 points of Beau. Pre-event favourite Ant Judge won the men’s DYN and DNF with swims of 181m and 144m, but a red card in the STA left him in 5th place overall. The women’s division was a similar story with national record holder Amber Bourke winning the women’s STA and DNF disciplines but receiving a red card for her DYN swim, leaving Emily with a higher overall score. Amber, who placed 3rd in DNF at last year’s world championships, did a 150m DNF on the Sunday of the competition, further than any other performance by either the men or women.

Beau and Emily are both newcomers to the sport. Emily competed in her first competition last year and the National Championships was Beau’s first freediving competition. “Part of what is so addictive about freediving is the rapid gains in time and distance that you can make when you first start training. We have a great group to train with in Brisbane where we can learn a lot from experienced athletes and at the same time be amazed at the distances that some of the newer club members are already achieving” said Emily. A recreational grade competition was also held at this year’s competition to give less experienced divers a taste of competitive freediving and it is hoped that next year’s Nationals will continue to grow with many of the recreation grade athletes able to compete in the main competition. The AFA will announce the location for the 2015 National Pool Championships later this year.