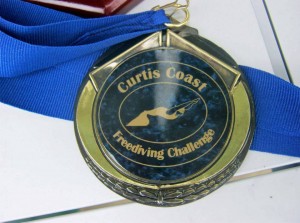 Freedivers from around Australia and internationally have been invited to submit entries to the Curtis Coast Freedive Challenge. The pool event to be held at the Gladstone Aquatic Centre will be held on 11-12 October 2014 and feature static (STA), dynamic (DYN) and dynamic no fins (DNF) disciplines. The event, known for its friendly atmosphere, has become a favourite of both first-time competitors and experienced athletes. Last year’s competition saw five national records broken, with Jonathan Chong (Singapore) and Pejman Siavoshi (Iran) each getting their respective national records in DYN and DNF. Amber Bourke also broke the Australian female DYN record with a swim of 200m.

Event organisers have already confirmed a number of sponsors and that there will be live-streaming of the event. The 2013 competition was the first freediving event to provide live streaming of all performances, along with commentary and athlete interviews, and was watched by audiences throughout the world. Freedivers of all levels and backgrounds are invited to attend. Entries close on September 30. Further details and entry forms can be found on the event web page.