The inaugural Australian Depth National Championship was held in association with Apnea Bali in Tulamben, Bali, Indonesia from 27 to 30 of August. The competition was a world record status competition.

There were three days of competition (with a day in reserve for inclement weather). Competitors were able to choose any discipline on any day and could do a discipline more than once. The overall male and female winners were the competitors with the highest aggregate scores from their best dive in each of the three discipline. The 2015 Australian Depth Champions were the best placed male and female Australian citizens

The overall winners, and 2015 Australian National Depth Champions, were Amber Bourke and Michael Bates. See below for a full list of results.

We would like to thank the generous sponsors who are supporting our sport and who helped to make this competition possible. A special thanks goes to the local organisers, Apnea Bali, whose hard work and dedication meant that the competition ran like clockwork.

Below is a list of athletes who participated, their nationality, and which AFA club/training group they belong to. 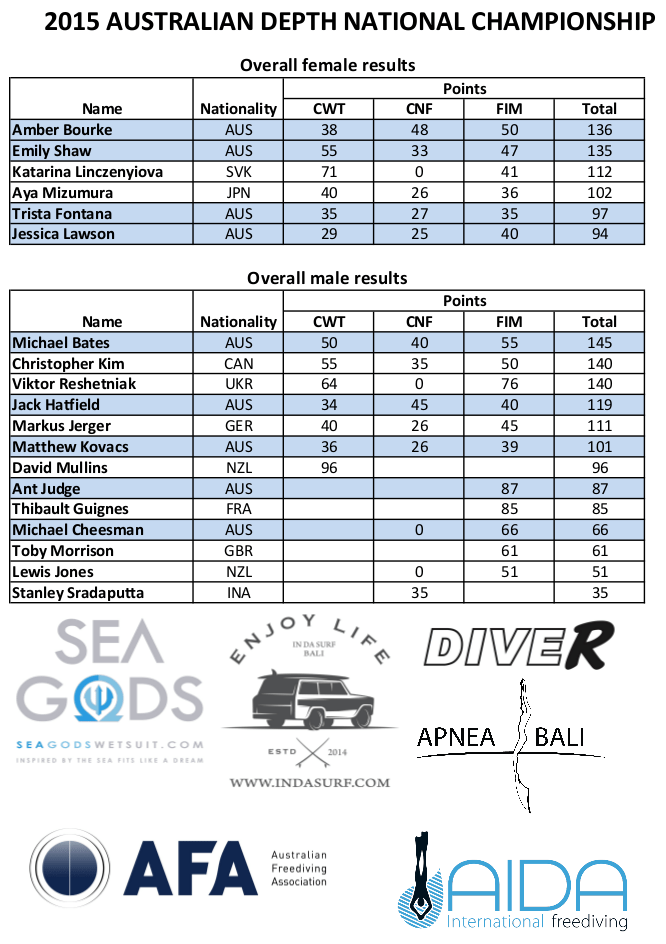 Results from each day of the competition. Disc means discipline (CWT is constant weight, CNF is constant weight without fins, and FIM is free immersion), AP is the announced performance (the depth the diver plans to dive to), RP is the realised performance (the depth the diver gets to), Time is the dive time, card is coloured card received (R is red – disqualification, Y is yellow – penalties apply, W is white – full points awarded), Pen is penalties, DQSP means disqualification due to incorrect surface protocol, and No tag means a bottom tag was not retrieved (penalty of 1 point). A point is given for each metre of depth. Where the athlete’s performance is less than the announced depth a penalty is applied of 1 point per metre that the athlete is short.

Overall winners: Amber Bourke and Michael Bates each received a custom fitting 3mm “Freedive Performance Suit” valued at US$450, courtesy of SeaGods Wetsuits. These wetsuits have three layers, lycra on the inside, 3d sponge (a balanced choice of rubber which is especially good for freediving), and a slick skin outer lining.

SeaGods developed a new cut for these wetuits which allows you to effortlessly extend your arms overhead. SeaGods use 37 body measurements to ensure the suit fits perfectly. This ensures that the flexibility of the neoprene is used to facilitate your body movements and not to compensate for a less than perfect fit.