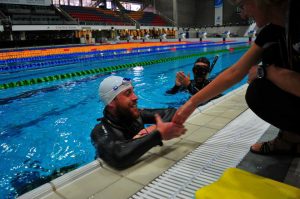 Lewis being congratulated after his impressive DYN performance

New Zealand athlete Lewis Jones was the overall winner on the weekend in the national freediving competition held in Brisbane. Lewis put up consistently good performances in all disciplines coming second in men’s static (STA) and dynamic with fins (DYN) and 5th in dynamic no fins (DNF). Lewis’ winning point score of 201 put him 8 points ahead of Singaporean freediver Jonathan Chong. As well as coming second overall, Jonathan won the men’s STA discipline and furthered his own National DYN record with a swim of 139m and a new DNF record of 110m. Further national records were set by Pejman “PJ” Siavoshi who broke the Iranian National DYN and DNF records.

All three athletes are currently based in Brisbane and train with the Brisbane Freedivers club. PJ competed in his first competition in October 2013 and has made impressive improvements to his performances since then. Lewis and Jonathan have both also had excellent year, realising several personal best performances in both pool and depth competitions. Although Lewis had competed in depth competitions previously this was his first pool competition. “I really surprised myself in DYN and DNF with personal best performances in the competition as I always thought the pressure would hold me back, but it seemed to give me a real boost and motivation” said Lewis after the competition. After a well-deserved short break he will be back training hard for competitions in New Zealand and Gladstone later this year.